St. John’s College is known for its small class sizes and personalized attention to students. Learning and sharing ideas is a way of life on the college’s Annapolis and Santa Fe campuses. National publications and administrators at other institutions have taken notice. U.S. News and World Report ranked St. John’s among the nation’s best liberal arts colleges for the quality of its faculty and teaching. In addition, The Princeton Review gave high marks to the college’s faculty and students.

Most Students Getting PhDs in the Humanities (HEDS)

Most Innovative (US News)

While rankings shouldn’t be the sole reason for choosing a college, they can give a glimpse into what students are experiencing and the reputation of faculty members and institutions as a whole. Here’s a look at St. John’s in the rankings:

# 23 Students Study the Most

Both St. John’s campuses were ranked among the Princeton Review’s Best 388 Colleges in the 2023 edition.

The Princeton Review surveys students to compile its rankings. The survey asked students to answer questions about academics/administration, life at the college, fellow students and themselves. The rankings above reflect the results of the survey for both campuses over the last several years.

Princeton Review: “Colleges That Pay You Back” 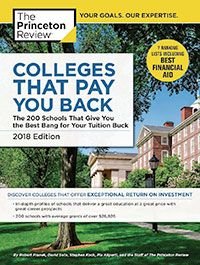 The Princeton Review profiled St. John’s Annapolis campus in its 2018 book Colleges That Pay You Back: The 200 Schools That Give You the Best Bang for Your Tuition Buck. The book includes seven ratings in the following areas: academic, admissions, financial aid, fire safety, green, ROI (Return on Investment), and quality of life. The methodology considered more than 40 data points, including information from 2016–17 surveys of students and administrators at 658 colleges. The Princeton Review also factored in PayScale.com data collected through April 2017 from alumni surveys covering starting and mid-career salaries, and career social impact.

# 1 Most Students Getting PhDs in the Humanities

# 10 Most Students Getting PhDs in Business

# 18 Most Students Getting PhDs in Social Sciences

# 22 Most Students Getting PhDs in Religion

The “doctorates earned” numbers come from National Science Foundation (NSF) and the “earned bachelor’s” numbers come from Integrated Postsecondary Education Data System (IPEDS). The Higher Education Data Sharing Consortium (HEDS) compiles these figures and creates an analytic based on those earning bachelor’s degrees at each institution that go on to receive doctorates (PhD, ScD, EdD, etc.).

USA Today ranked Santa Fe the No. 8 Best Small College Town. These towns are noted for having a fun, youthful vibe, unexpected shopping options, restaurants, bars and entertainment—all plentiful and affordable, and all with a population of less than 100,000.

Business Insider ranked Santa Fe as No. 6 in the category Best College Towns in America. The rankings are calculated using 11 criteria, including economic vitality, availability of entertainment and rent.

Travel and Leisure ranked Annapolis No. 14 in the Best College Town category. These towns were ranked based on their entertainment, food and drink options, as well as opportunities for socializing.

College Raptor identifies a “hidden gem” as a college that receives fewer than 5,000 applications a year, has fewer than 7,000 undergraduates enrolled, and may not be as well-known as larger schools in the country or region. Both Annapolis and Santa Fe were ranked #1 in their respective states and regions.

College Consensus creates an “aggregate ranking” using data from other college ranking sites, including U.S. News & World Report, Forbes, and Cappex. Both the student experience rankings and school rankings are aggregated to create the Student Review Rating and Publisher Rating, which are then combined to arrive at the overall “consensus.”

“Books, books, and more books is what you’ll get at St. John’s—from Thucydides to Tolstoy, Euclid to Einstein. St. John’s attracts smart, intellectual, and nonconformist students who like to talk (and debate) about books and ideas.”

For nearly 40 years, the Fiske Guide to Colleges has chosen a select group of schools noted for quality academic offerings and affordable cost for its annual Best Buy list.

The tradition continues with the Fiske Guide to Colleges Best Buys of 2023, comprising twenty public and private colleges and universities.

These are schools that, in the judgment of the editors, offer “outstanding educational value as determined by academic quality in relation to the net cost of attendance.”